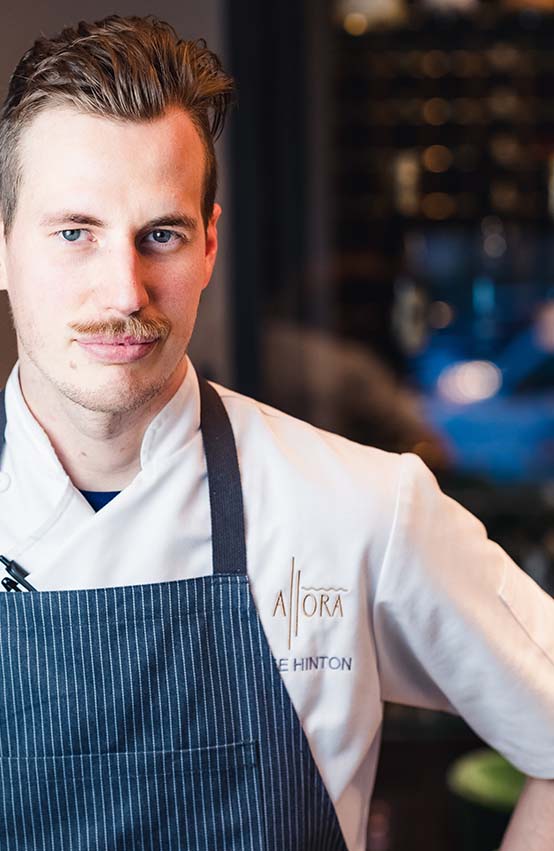 Chef Lee Hinton grew up in Sacramento and eventually moved to San Francisco in 2002. He discovered that he loved working in kitchens and decided to attend CCA while he was there. He soon realized that the school wasn’t going to give him the experiences he wanted, so he left school and started working two full time jobs in kitchens to learn as much as he could. He got a job opening Zuppa Restaurant in Soma for Joseph Manzare (owner of Globe Restaurant, Pescheria and partner or Tres Agaves), and later also worked for the Rosenthal’s at Salthouse.

Wanderlust and a desire for new experiences and knowledge led Lee to Portland, Oregon where he worked his way up to Sous Chef at a restaurant named and inspired by the food of Lucca, Italy. This is where Chef Lee was first exposed to farm to table dinners, relationships and experiences with winemakers, farmers and guests all sitting at a big communal table, dining, laughing, and bonding over the shared experience.

Meanwhile, the Rosenthal’s were in the process of opening a new location in Portland’s pearl district (Irving Street Kitchen).  He helped open this location, launched the house charcuterie program, and further developed relationships with farms and producers. It was during this phase of his career that he also got the chance to work with Jenn Louis at Lincoln in East Portland.

The desire for new experiences soon sent Chef Lee to Los Angeles where he accepted a job working for Quinn and Karen Hatfield at their Michelin Starred restaurant Hatfield’s. In 2012 they also opened Sycamore Kitchen, with Lee as sous chef.

Chef Lee eventually moved back to Sacramento in 2013 and took a job running the banquet department for the Delta King Hotel, which is when he and Chef Deneb first met. After a few years, Chef Lee decided the corporate hotel culture didn't provide the creative, farm focused food culture, and environment he craved. Seeing Chef Deneb and Chef Joe’s passion and dedication to the growth of the restaurant scene in Sacramento, Lee took a job working at Uptown Pizza Kitchen.  It wasn’t long before Chef Deneb and Elizabeth-Rose opened Allora in East Sacramento, and Chef Lee joined the team as their Sous Chef.