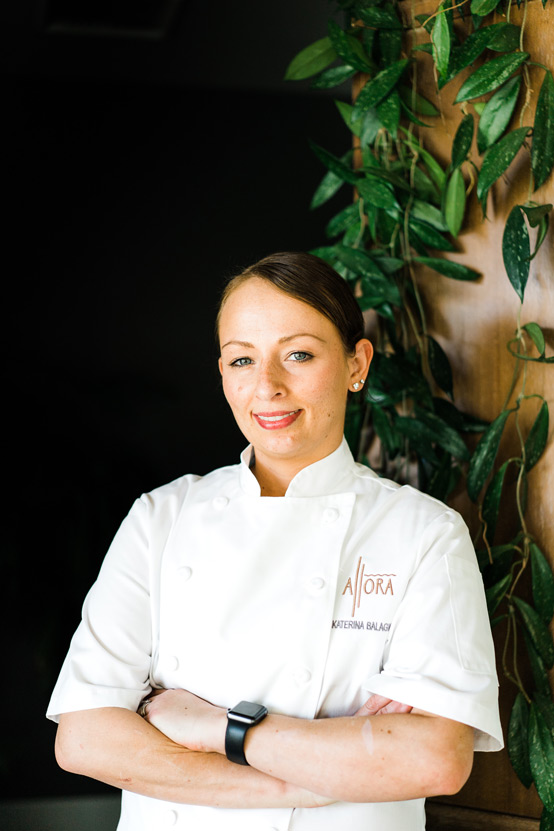 Chef Katerina Balagian was born in Yerevan, Armenia and moved to the United States when she was very young. She grew up in Providence, RI raised in a family that placed a huge emphasis on eating together and feeding others. Growing up, she fondly remembers the years of having four generations together at the dinner table for every meal and she and her brother would often invite friends, coworkers and neighbors to join the family to eat. Although her Armenian heritage was very important to her and the family, she has always considered Providence to be her hometown.

Eventually, Kat outgrew her hometown and moved to California in search of greater diversity in food and culture. While studying Political Philosophy in Santa Rosa, she began dabbling in the kitchen, but hadn’t begun to consider it as a career option until her move to Berkeley.

While in Berkeley, she worked full time as an intern at a local nonprofit organization. During this time, she began working part time in addition to her nonprofit work at a local restaurant, La Mediterranee. Working her way up, she eventually became a hiring manager and after enrolling in a local pastry program at Laney Community College, she began contributing to the pastry program. It was also during this time that she faced major health issues that eventually left her unable to walk. The second she was able to, Kat walked back into the restaurant and asked to be put on the schedule. It was at this moment that she realized that restaurant life was the life for her.

After leaving La Mediterranee, Kat began working as a morning baker and pastry chef at the esteemed Katrina Rozelle Pastries & Desserts. During this time, she also accepted a part time position at Dyafa, a fine/casual Palestinian restaurant in Oakland, the brainchild of Daniel Patterson and Reem Assil. After Assil stepped down as partner, she worked under rising star, Chef Mona Leena who inspired her to take a leap of faith and move into the fine dining world after being offered a pastry position at Coi, a two Michelin starred restaurant and institution in San Francisco.

After Coi closed its doors due to the pandemic, Chef Katerina decided to move to Sacramento to be closer to her parents and accepted a Junior Sous position at Catta Verdera Country Club where she did everything from cooking on the hot line to running banquets to designing wine tasting menus. In addition, she became the Kitchen Manager for The Lean On Me program at The Brazilian Center for Cultural Exchange in Sacramento, feeding hundreds of unsheltered Sacramento residents each week. After a year of working at Catta Verdera, she decided that she needed a more creative environment where she could thrive, and the moment she walked into Allora, she knew that she was home.

Kat is a very special part of our team at Allora. She is dedicated and innovative and brings a beautiful spark to our creative process.